Laboratory fume hood is also known as fuming hood, fume cupboard and chemical fume hood. Aakar is one of the Quality Fume Hood manufacturers in India. AAKAR standard Fume cupboards are ergonomically designed and manufactured, following the guideline of AHRAE-110 and SEFA with safety parameters.

A fume hood is a type of local exhaust ventilation system inside the laboratory. It is a typical enclosed cabinet with sliding glass opening at front. Inside of the hood is aerodynamically designed that creates specific airflow pattern which ensures systematic and well directed extraction of heavy and lighter fumes or vapour generated in the fume hood. Inside working area of fume hood is mainly made of non-metallic & non-corrosive material as the chemical fumes are exposed to this area. MOC of the duct pipe is also recommended non-metallic & non-corrosive to ensure longevity of entire system.

Fume hoods are one of the most important safety equipment used to protect laboratory personnel form getting exposure to toxic gases, hazardous chemical fumes and harmful vapours generated during experiments performed inside fume hoods. (Caution: chemical fume hood may not provide protection from highly toxic i.e. LD < 50 mg/kg or highly reactive materials. This kind of operations must be carried out in a Glove box or other tightly closed system). Aakar fume hoods are supported by properly designed fume exhaust duct system having efficient centrifugal blower. In order to compete budget and space the exhaust duct system can be clustered with more than one fume hoods too.

Our team of experts calculates suitable duct size and required capacity of blower of exhaust duct system for every composition as per the need to achieve the best performance out of it. In case there is a high risk of fire, the fume hood should be equipped with fire extinguisher. It is made of powder coated steel, laminated wood and Stainless steel as per the need of your lab environment. We have verity of fume hoods for various laboratories like QC Lab, R & D Lab, Wet Lab, Hot lab or any other lab belonging to various industries such as Pharmaceutical, Healthcare, Industrial Research and development, clinical research, Bio-technology, Chemical, Petrochemicals, Cement, Engineering, Food & Beverages, Forensic Science, School & Colleges and Government sectors. Mainly we found three types of fume hoods as per its mounting style. 1) Bench mounted fume hoods 2) low bench fume hoods and 3) walk in fume hoods. As per the method to bring in air, there are three types of fume hoods found. 1) Open bypass 2) restricted bypass 3) Auxiliary air inlet. Some fume hoods are named as per their utility too, like Perchloric Acid Fume hood, Radioisotope fume hood etc. 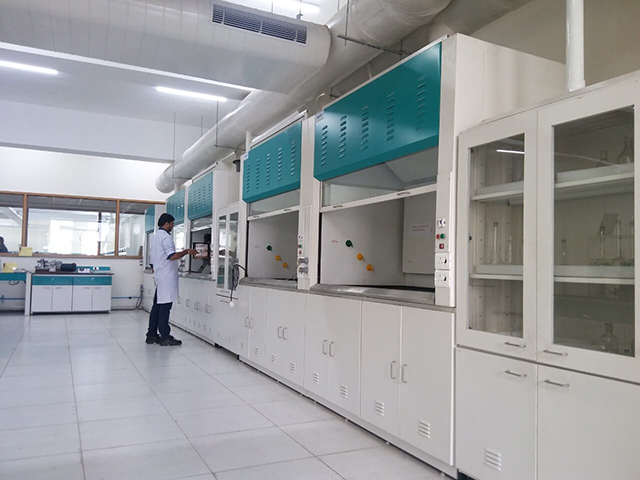 This is the most popular type of fume hood used in laboratory. It is generally placed on bench top, platform, frame or above cabinets. Bench mounted fume hood is also called as bench-top fume hood. It is available in various length. Fume hoods 5 feet & 6 feet length are widely used in laboratory. However, it is available in length of 7 feet, 8 feet and 10 feet also as per the need. Dimensions of fume hood represent the overall size (outer dimensions) of fume hood. Inside dimensions may vary manufacture to manufacturer. Bench top fume hood may have various type of openings at the front fascia like vertical, horizontal or combination of both.

Low bench fume hood is also called as distillation fume hood. It is designed for use of comparatively taller apparatus. It means upper unit of this fume hood is comparatively taller in height. Accordingly, its base height is shorter to balance over all height of regular bench mounted fume hood. Generally, it’s base height varies between 300mm to 450mm. This also belongs to the family of Bench top fume hood. The sash shall be kept vertical or horizontal as per the need. 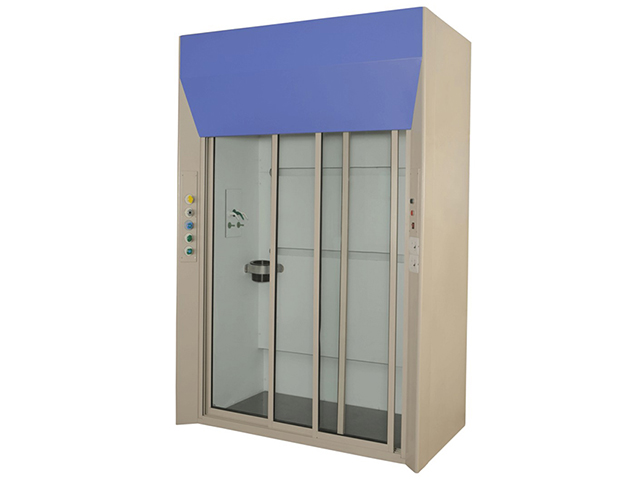 The term ‘walk-in’ is hinted that a person can walk-in to the hood. In fact, the word ‘walk-in fume hood’ is misleading. So far, the safety precaution is concerned in the laboratory, the hood must never be entered during the experiment or fume generation inside the enclosure. Because of large opening area at front fascia, it is advised not to use floor mounted fume hoods for experiments that generate highly toxic fumes or poisonous gas. It is recommended that only one sash be fully opened during hood operation. 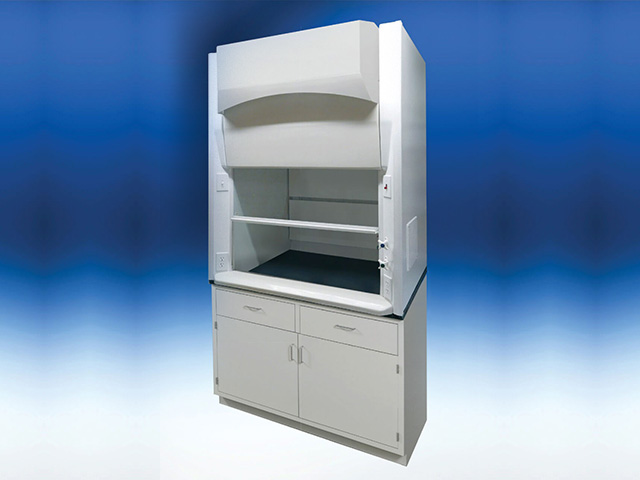 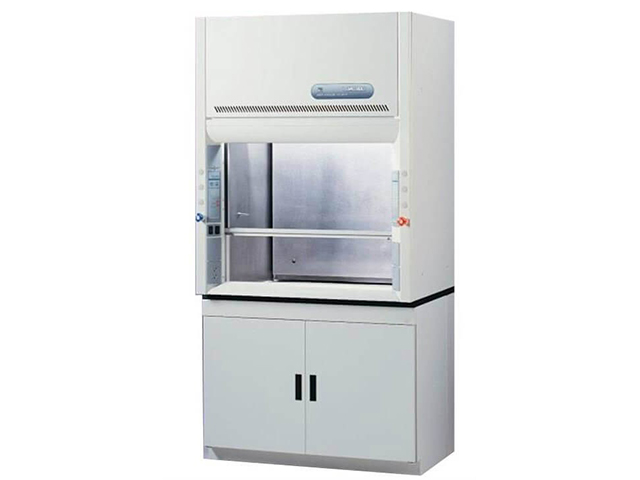 A fume hood used for Beta and Gamma radiation shall be called as radioisotope fume hood. Construction of this fume hood same as standard bench mounted fume hood except its lining and work surface must be of SS304 material. All inside corners of upper unit must be coved seamless welded in order to clean and decontaminate the surfaces exposed to radioactive material. SS 304 work surface welded with lining must be dished to contain spillage and reinforced to carry the load of heavy lead bricks. The load bearing capacity of radioisotope fume hood work surface should be minimum 200 pounds per square feet to 1000 pounds per fume hood. 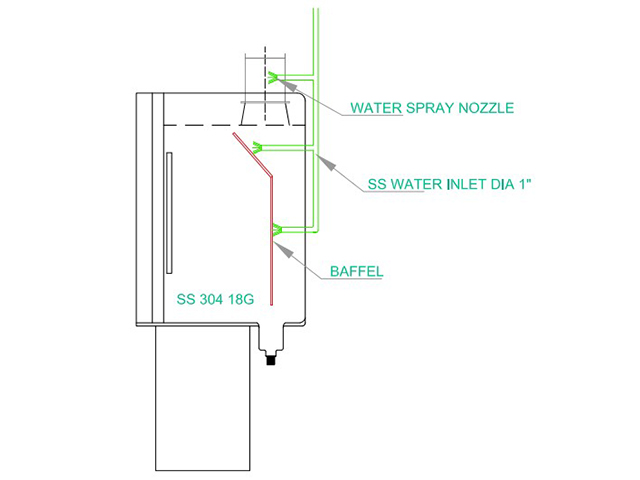 A perchloric acid fume hood has similar characteristics of standard bench top fume hood; however, interior lining and work surface must be made of SS 304 which are coved and seamlessly welded. Non-reactive and corrosion resistant material must be used through out the exhaust system. Perchloric acid fume hood will have to have water wash down system to remove perchlorates and prevent building-up potentially explosive perchlorate salts. A work surface has in-built open drain trench at rear side of hood under the baffle. The drain outlet should have capacity to drain minimum of 56.8 litres per minute. Perchloric fume hood system should not be clustered for common exhaust system. 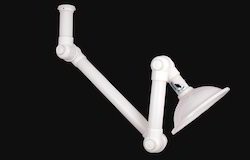 It is a local fume extraction unit. It is also known as elephant trunking fume extractor. This is used for the lighter fumes or gas generated in small volume during experiment carried out on table in laboratory. This cannot be used for medium to high volume fumes. There are two types of models available: Ceiling mounted and wall mounted. MOC of spot extractor is polypropylene or aluminium. It is articulated at three points. One arm is mounted on ceiling or on wall as per the requirement and other arm had circular dome hood at the end with damper. It is flexible and its arms move in all directions. This is connected with centrifugal blower to achieve required suction. For optimum performance, spot extractor should be adjusted 300mm to 450 mm above the fume release point. 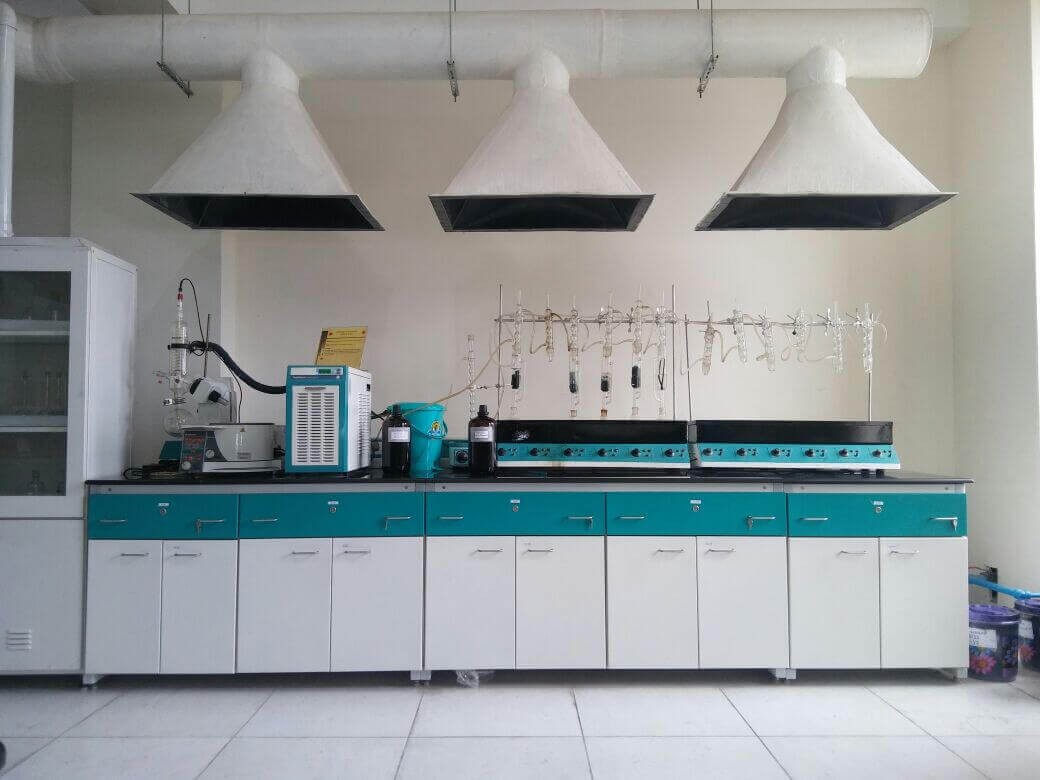 This is a big size local spot extractor without flexibility. Laboratory canopy hood is like a chimney. It is open from all sides and bottom. It is mounted on wall or ceiling as per the space available and connected with centrifugal blower to achieve required suction. It is available in PP-FRP, powder coated steel and SS as per the need. Please note that this not an alternative of laboratory fume hood. This is also used for lighter fumes and cannot be used for medium to high volume fumes.

Get a Quote!
Top